The BATTLE OF NEW ORLEANS

Everyone at 1TAC thought we’d take the time to refresh your memory this Holiday Season. Here’s a bit of history that America seems to have forgotten. Don’t forget that special hard to shop for person. HOLIDAY SALE!

The Eighth was a federal holiday in the United States from 1828 until 1861 commemorating the U.S. victory in the Battle of New Orleans on January 8, 1815.

The Eighth was celebrated widely across the Southern United States after the War of 1812. January 8 became an official federal holiday in 1828, following Andrew Jackson’s election as president and continued as such from that time until the start of the Civil War. The holiday remains largely forgotten by the American public.
According to The Bryan (Ohio) Times article from January 4, 2005, the Battle of New Orleans was a “major turning point” in American history, but many people who live in New Orleans did not even know that the battle happened in their city. As it was the final war waged against the United Kingdom of Great Britain and Ireland, some consider it to be America’s second independence.[2] Historians recall the celebrations were larger than Christmas and were only surpassed by The Fourth. 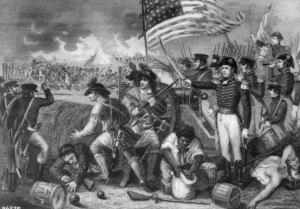 The Battle of New Orleans was a series of engagements fought between December 14, 1814, and January 18, 1815, constituting the last major battle of the War of 1812 American combatants,[9] commanded by Major General Andrew Jackson, prevented a much larger British force, commanded by Admiral Alexander Cochrane and General Edward Pakenham, from seizing New Orleans and the vast territory the United States had acquired with the Louisiana Purchase.
The Treaty of Ghent had been signed on December 24, 1814 (but was not ratified by the US Government until February 1815), and hostilities continued without the involved parties knowing about the Treaty, until January 18 by which time all of the British forces had retreated, finally putting an end to the Battle of New Orleans

ON THAT NOTE, DON’T FORGET THAT SPECIAL PERSON OR LOVED ONE IMPOSSIBLE TO BUY FOR THIS HOLIDAY SEASON…

We hope you have all your gift ideas covered but if you just can’t think of the right gift for that loved one who is impossible to buy for 1TAC has just the line up of holiday gifts for anyone in the family. SHOP NOW!

Black Friday starts NOW and there are big savings waiting for you here.

THE BATTLE THAT CHANGED THE COURSE OF AMERICA

Although the engagement was small in scale compared to other contemporary battles of 1815, such as the Battle of Waterloo, it was important for the meaning applied to it by Americans in general and Andrew Jackson in particular. 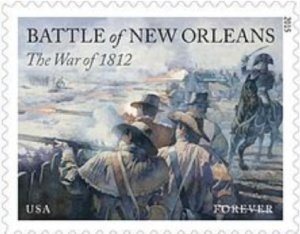 US troops along Jackson’s Line fire on British soldiers on a stamp issued January 8, 2015. This was the final US stamp in a War of 1812 series of four marking its bicentennial.
Americans believed that a vastly powerful British fleet and army had sailed for New Orleans (Jackson himself thought 25,000 troops were coming), and most expected the worst. The news of victory, one man recalled, “came upon the country like a clap of thunder in the clear azure vault of the firmament, and traveled with electromagnetic velocity, throughout the confines of the land. The battle boosted the reputation of Andrew Jackson and helped to propel him ultimately to the White House. The anniversary of the battle was celebrated as a national holiday for many years, called “The Eighth”, following Jackson’s election as President and ended after 1861 and it continues to be commemorated in south Louisiana.
In honor of Jackson, the newly organized Louisiana Historical Association dedicated its new Memorial Hall facility on January 8, 1891, the 76th anniversary of the Battle of New Orleans.
A federal park was established in 1907 to preserve the battlefield; today it features a monument and is part of Jean Lafitte National Historical Park and Preserve.
The 8th of January became a traditional American fiddle tune, honoring the date of the battle. More than a century later, the melody was used by Jimmie Driftwood to write the song “The Battle of New Orleans”, which was a hit for Johnny Horton and Lonnie Donegan. That song was converted into punk rock tune for the play Bloody Bloody Andrew Jackson. 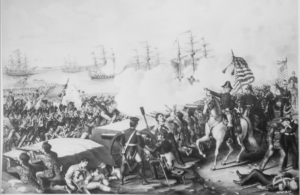 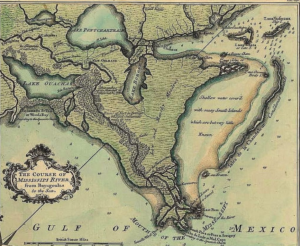 By December 12, 1814, sixty British ships with 14,450 soldiers and sailors aboard, under the command of Admiral Sir Alexander Cochrane, had anchored in the Gulf of Mexico to the east of Lake Pontchartrainand Lake Borgne Preventing access to the lakes was an American flotilla, commanded by Lieutenant Thomas ap Catesby Jones, consisting of five gunboats. On December 14, around 1,200 British sailors and Royal Marines under Captain Nicholas Lockye set out to attack Jones’ force. Lockyer’s men sailed in 42 longboats, each armed with a small carronade. Lockyer captured Jones’ vessels in a brief engagement known as the Battle of Lake Borgne. 17 British sailors were killed and 77 wounded,[20] while 6 Americans were killed, 35 wounded, and 86 captured.[20] The wounded included both Jones and Lockyer. Now free to navigate Lake Borgne, thousands of British soldiers, under the command of General John Keane, were rowed to Pea Island (possibly now Pearl River Island[21]), about 30 miles (48 km) east of New Orleans, where they established a garrison.

Come take a look at our Holiday Gift Ideas. www.1tac.com